Last April when the scope of the pandemic and it’s associated regulations became clearer, there was legitimate concern that we might not be able to hold many events in a typical fashion, if at all.  NENSA quickly gathered regional leaders from clubs, industry and medical professionals to gain insight and plot a course that would provide opportunities for success.  Perhaps one quote from those discussions sticks out, “you might just have a chance in New England.”  However the tone in the Zoom room was one of caution — and a clear sense that the safety of our community and the ones we visited far outweighed the benefits, or entitlement, of hosting athletic competition.

NENSA — along with organizations large, small and some that were born from necessity — forged ahead with planning for competitions.  This optimism, along with the boon of albeit late, but healthy snow, created the opportunity for cross country skiers to thrive in every corner of New England.

The winter is not over yet — but we are headed into the post season now — and that will look different too.  The past weekend was in many ways a culmination (and celebration) of the hard work done by athletes, coaches, officials, volunteers, and venues.  Craftsbury hosted a two-day Vermont Cup, while DublinXC and the Holderness School partnered to create a two day Eastern Cup race weekend — for what will be the only junior interstate racing opportunity for the 2021 ski season.  For a moment (a full weekend) things seemed almost normal.  While it’s easy to want more — and our community has clearly shown we could — it’s really important to focus on what we have achieved and how well we’ve done that.  If you have a few minutes tune into Bill Harmeyer’s vlog — the insight and patience of this young professional skier highlights the process and joy of the cross country skiing lifestyle.  We’ve weathered one of the worst storms of our lifetime and we all look forward to more normalcy soon.

Originally intended to be a classic sprint with full rounds, the Dublin races evolved into a two run freestyle sprint qualifier.  This format was also used in Vermont at Prospect Mountain — providing a similar athletic demand to multiple sprint rounds and a fun experience for athletes, coaches and virtual followers too.  DublinXC and their well-trained-ranks delivered a top notch experience — building on the success of the past two years of the Dublin Double, and the Dublin Classic (New Hampshire Cup) hosted just a few weeks earlier.  A practiced schedule dovetailed with participant compliance — allowing for smooth and uncrowded transitions through the day between age groups and genders.  To make an interstate event feel extremely safe during a pandemic is a lofty task.  There is no doubt the spirit of Jim Rodrigues and all he taught so much were a part of, and witness to, this fantastic day of racing.

The Holderness School skiing family has understood the philosophy of creating a ski festival for decades.  For instance, the now veteran Chief of Stadium was weaned to ski lore as a BKL’er some forty years before on the same field — or the custom of a Jimi Hendrix riffed National Anthem on an electric cello.  Yet there is undeniable new and renewed energy in this community system.  There are plans for snowmaking, and updating – while preserving, the nostalgic feel of this rolling serpentine trail network.

Saturday in Dublin the sun did a beautiful dance behind clouds and trees — Sunday it provided a perfect winter transformation.  Racers and support staff arrived and departed at regulated intervals, yet an unspoken lightness was shared by all through the day.  There is hope for the close future.  It was a klister cover day with two forgiving railroad tracks that stayed intact, and perhaps even got faster through the day.

“you might just have a chance in New England.”  And we did.

Craftsbury continues to be an industry leader when it comes to hosting events.  Vermont was the first state with strict regulations put in place, originally limiting any gatherings — due to inspired work from within their organization and several other key snow sport bodies — competition was eventually permitted for residents of the state.  As NENSA intentioned to create racing opportunities, Craftsbury stepped up in customary fashion and adapted their resources to best fit the broader Vermont skiing community.

The weekend’s races accommodated skiers of all ages and by many accounts the Bill Koch competition on Sunday was the highlight of the event.  The terrain features carved into Ruthies Field are a product of much skill and thought — they will be utilized through the remainder of the winter for competition and no doubt create transcendent nordic experiences for countless youth and adults.  The naming of the event and the integrity to host such an inclusive and professional experience for all comers is too fitting of a tribute to Bill Henchey — a hero of Vermont skiing. 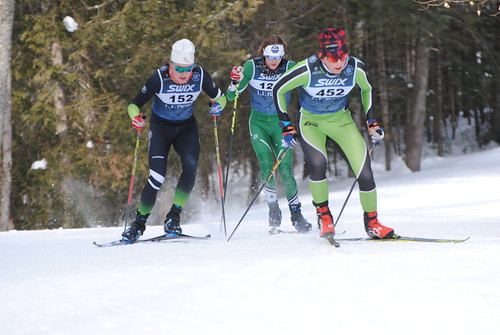 A benchmark of our safety protocols this season has been intrastate racing.  When we view competition and associated rankings with a traditional lens, there is no perfect solution — and that’s part of what the pandemic has taught us.  NENSA has remained steadfast in creating opportunities for our athletes to gather and compete.  It’s safe to say we’ve planned, postponed, and conducted more junior events than ever before in NENSA’s 25 year history.  Our highest level of competition, the Eastern Cup, was made possible by the creation of “State Cups,” some by necessity and some with the intention of creating parity for across states.

Due in part to regulations, we will not be hosting an Eastern Regional Championships.  Instead, each state will be hosting their own version of a U16/Eastern High School Championships — dubbed the NENSA Eastern States Championships.  The Junior Ranking List will compile each of these competitions.  The intention of the system is to give all athletes the opportunity for a “Best 3” ranking as a comparison across New England.  We acknowledge that each state has had its disadvantages, including the temporary loss of collaboration with our great friends from the Mid-Atlantic.  All traditional team naming and associated development programs will undergo due evaluation — with the knowledge that we will be recognizing more athletes than in a typical year.

Popular Racing and A Hall Mark of Excellence

The Popular race calendar remains nimble and reinforced by Virtual events — we are currently processing February’s data for the A Hall Mark of Excellence.  We look forward to sharing more exciting new with you shortly.

Be sure to check out the Gift Certificates Galore