A talented field of 200 skiers, comprised primarily of athletes ages 14-20, were treated to true winter conditions last weekend in New Hampshire.  The two-day affair started on the serpentine trails of the Dublin School – for the Dublin Double – with two fast paced freestyle races on a shimmering track.  In one of the final tests for athletes in the hunt for a spot on the New England Junior National team – racers contested a 3 kilometer prologue and a 1.5 kilometer sprint.  On Sunday the Holderness School sculpted the perimeter of their trail system to traditional skiing perfection – with two parallel tracks on a 5 kilometer loop.  If that wasn’t enough a terrain filled course for Bill Koch skiers and a well designed cross country jump made for a true Nordic scene. 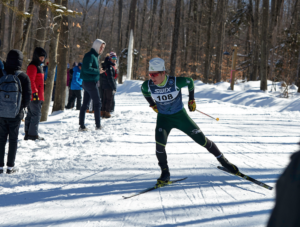 For the second year of the Dublin Double – an event designed to test top end fitness, speed and agility – the strength of New England skiers shined bright.  Spectators were treated to a display of grace and grit, allowing skiers who could both effectively pressure their bases on the uphills and feather their edges on the downs to excel.  At the end of the day, Will Koch and Nina Seemann, both from the Stratton Mountain School prevailed as the overall champions.  After combining the total time of 4.5 kilometers of racing, mere seconds separated them from formidable competitors – Brian Bushey of GMVS and U16 standout Ava Thurston of Mansfield Nordic.  Sam Murray (U18) of the Putney Ski Club and Sophia Scirica (U16) of Cambridge Sports Union would take the third step of the podium with perhaps their best skiing of the year. The Cheri Walsh Memorial historically marks the end of the regular Eastern Cup season and the naming of the New England Junior National Team.  Many purists are drawn to the “old school” trails that undulate naturally through the woods with rounded corners and transitions that make capable skiers smile with delight.  For the two hundred junior skiers who travel to Holderness each year they are likely thinking more of how fast they can ski – but it’s the ones who embrace the terrain that undoubtably rise in the results.  The 2020 edition of a nearly thirty year tradition greeted competitors with some of the best fine grained snow conditions one could imagine.  As it was a race of the classic technique, coaches scrambled to create the perfect concoction of grip wax – the most successful with subtle combinations of klister buried in hard wax. In the men’s race the tables turned with Brian Bushey edging out Will Koch for the victory – a perfect display of New England athletes pushing each other as we head towards Truckee, California to defend the Alaska Cup Trophy (an honor awarded to the strongest division at Junior Nationals).  On the women’s side Shea Brams of the Cambridge Sports Union (CSU) took a decisive victory of some thirty seconds over Sammie Nolan of Mansfield Nordic.  The third step of the podiums were claimed by late charging Griffin Wright from Craftsbury and Amelia Tucker of CSU. At the conclusion of the races – including an enthusiastic Bill Koch event with jumps, under hoops, and hay bales to navigate – the ultimate moment of many skiers seasons was realized with the naming of the New England Junior National Team.  While only a small portion of those skiing in New England get this opportunity it is important for athletes to remember the journey they took this year – laying their best efforts on the line and traveling to awesome venues across the region.  The spirit of cross country skiing is strong in the East and the United States and it is the community that provides the strength that our 51 skiers will take to Junior National Championships. This year’s team New England boasts both proven and fresh talent and NENSA is proud to support this amazing group of athletes with a dedicated staff of fourteen drawn from our clubs.  The team will travel to Truckee, California arriving by March 7th with races beginning on the 9th.  Athletes will compete in two distances races, a sprint and before concluding the championships with a team relay.  You can check out the full schedule here: https://www.xcjuniornationals2020.com/schedule and of course stay tuned right here and on our social media channels here for up to date recaps.